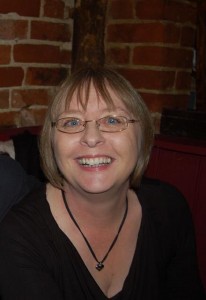 Our colleague Candy Hogben passed away on Tuesday 25th November. She will be keenly missed by everyone at Tassells.

Candy was a secretary at Tassells for over 18 years, she had previously worked at Lloyds.

Candy was a universally liked and respected colleague. These are easy things to say but everyone did like and respect her. Candy was the sort of person that if you met her in the street, in a shop or in a pub, in Faversham, you were pleased to see her. She worked hard because she liked it that way. Her work was important to her and she enjoyed working in a calm, brisk way. Candy’s work was always accurate, she was thoughtful and careful. She took quiet pride in her work and rightly so. Candy was never part of the problem and always part of the solution.

Candy was my secretary for the last 6 years and she was often like the 7th Cavalry. She was very kind and we went through the pretence that I was organising her. Even when she was ill and having chemotherapy, she would come in and work on a part-time basis. Candy said she got bored without her work and  wanted as much as possible to maintain her work/life balance. When she was  ill, she would sometimes find it difficult to climb the stairs to her office, but she always managed it, however long it took her, but she laughed it off and made light of it.

Candy never got in a flap or got flustered and always inspired calm in others. Candy was innately humble and unassuming, but she had no reason to be humble, because she was very capable and very shrewd. Some people are described as ‘not suffering fools gladly’, Candy suffered fools with great patience and tried to help them.

I am certain that she could have been a lawyer herself if she wanted to, but I think that work/life balance was more important to her. It was clear to everyone at Tassells how important her family was to her, particularly her husband Martin and her daughter Bethany, but also her parents and Martin’s family. Bethany’s picture was always near her desk. My abiding memory of Candy is the Hop festival in September 2013, just before she became ill. It was sunny, and she was standing with Martin and smiling happily, with her cowboy hat listening to the music in the garden of the Vaults pub.

I will miss her. We will all sorely miss her. There have been some public and many private tears. Our thoughts are with her family.